Every Monday (with some exceptions) I will post books coming out this week. If you have a book coming out and would like me to mention it during its release week, please click here for more details.

Kiss of Frost by Jennifer Estep
Release Date: November 29
Publisher: Kensington
Description: Logan Quinn was try­ing to kill me. My Spar­tan class­mate relent­lessly pur­sued me, swing­ing his sword at me over and over again, the shin­ing sil­ver blade inch­ing closer to my throat every time. A smile tugged up his lips, and his ice-blue eyes prac­ti­cally glowed with the thrill of battle...

I’m Gwen Frost, a second-year warrior-in-training at Mythos Acad­emy, and I have no idea how I’m going to sur­vive the rest of the semes­ter. One day, I’m get­ting schooled in sword­play by the guy who broke my heart — the drop-dead gor­geous Logan who slays me every time. Then, an invis­i­ble archer in the Library of Antiq­ui­ties decides to use me for tar­get prac­tice. And now, I find out that some­one at the acad­emy is really a Reaper bad guy who wants me dead. I’m afraid if I don’t learn how to live by the sword — with Logan’s help — I just might die by the sword …
To Purchase: Amazon

With few resources, Eddie races to clear his name, unveil the fraud scheme, and expose the killers before he becomes their next victim.
To Purchase: Amazon

Breathe by Melanie McCullough
Release Date: December 2
Description: Life's hard. People make it harder. They tether you to them. Make it difficult to breathe, and damn-near impossible to leave...

Seventeen year-old Abby Rhoades knows this all too well. Born to a mother who could never love her and who vacillates between a sloppy drunk and a suicidal maniac, Abby's never had it easy. But Abby can swim. And Abby has a plan--win the state championship, earn a free ride to Penn State, and leave her small town and suffocating mother behind.

But then the body of Tom Ford, her mother's latest boyfriend and a man Abby adored, washes up along the shore of the Susquehanna River. His injuries suggest murder and suspicion quickly falls on Abby then on her best friend Garrett Scott, both of whom saw Tom the night he died.

They both know what happened that night, but neither one is talking. There's too much at stake and the truth could tear them apart.
To Purchase: Amazon (Link Forthcoming) 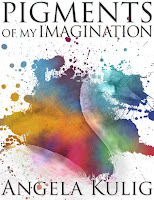 Pigments of My Imagination by Angela Kulig
Release Date: December 2
Publisher: Red Iris Books
Description: From the moment Lucia steps into Bayside Art Academy, she is fed a steady stream of lies, but it’s not until she meets Michael that she begins to question the people she trusts. Unraveling fact from fabrication seems impossible until Lucia finds her first painting, and discovers the dead do not lie--at least not to her.

A dozen lifetimes ago, Lucia started a war. Not a war with armies or guns, but a bloody war nonetheless. The path leading Lucia to the truth is hidden within lovely art that spans the ages. In this life, however, Lucia doesn't know where to look. Lost, she turns to the one thing she knows with certainty--she is in love with Leo, and has been before.
To Purchase: Amazon (Link Forthcoming)

Have you or will you read any of these books?
Posted by Cherie Reich at 7:30 AM