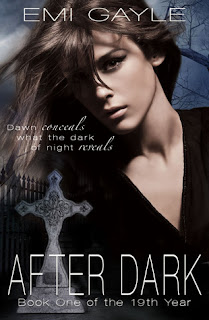 In exactly eight months, five days, three hours and thirteen minutes, Mac has to choose what she’ll be for the rest of her life.

She has no choice but to pick. As a Changeling, it’s her birthright. To Mac, it’s a birthchore. Like going to school with humans, interacting with humans, and pretending to be human during the pesky daylight hours.

Once darkness descends, Mac can change into any supernatural form that exists—which makes her as happy as she can be. That is, until Winn Thomas, the biggest geek in her senior class figures out there’s more to what hides in the dark than most are willing to acknowledge.

In this first of the 19th Year Trilogy, Winn might know more about Mac than even she does, and that knowledge could end their lives, unless Mac ensures the powers-that-be have no choice but to keep him around.

Review: The only one who has a choice might make the wrong one in Emi Gayle’s unique paranormal novel After Dark.

In a few months, Mac Thorne must choose what she wants to be for the rest of her life. But for a Changeling, she can’t decide. Vampire one minute, fairy the next, as nightfall comes, she can be anything. By day, she’s an ordinary human attending ordinary high school. The one boy who can teach her what to choose is different than anything the council has seen. He’s human, and Mac soon discovers how limited her limitless possibilities truly are.

After Dark has a great teen voice that drew me into the novel. I loved Mac’s sarcasm coupled with her insecurity. What can be sexier than a hot nerd like Winn? Not much. He’s a brilliant compliment to Mac. Each character steps off the pages and feels real. The plot is fast-paced with plenty of twists and turns. I loved reading the mythology and magical creatures introduced, especially the magical book written in Latin and ancient Greek. The theme of choice plays heavily in the novel, and Mac is great at milking her choices for all they’re worth. And that ending ... definitely leaves a reader craving more!

For paranormal fans, After Dark by Emi Gayle is a win-win. I can’t wait to read book two!