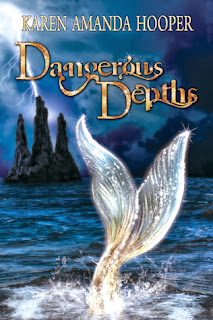 Hell hath no fury like a selkie separated from his true love.

The gate to the sea creature realm is finally open. Yara wants to bask in the glow of her budding relationship with Treygan and explore Medusa’s world, but as the new leader of Rathe her powers are needed to save a sea creature she’s never met.

Rownan assumes the worst is behind him when he returns home to be reunited with his wife, Vienna, only to discover she’s gone. She traveled to the evil realm of Harte to find another gateway to Earth and was never heard from again. Rownan claimed he would go through hell to be with her, and now he must prove it.

Rownan, Yara, and Treygan will put their lives and souls at risk by traveling to the most dangerous realm of all. Love is supposed to conquer all, but no one has ever conquered Harte.

Teaser: Rowan ran his hand over his goatee. “We’re going to burn to death, aren’t we? Who would have though hell would be so predictable?” [44% Ebook ARC. I have to admit I loved the hell puns and jokes while they are in Harte (i.e. hell).]

Review: Yara thought her Triple Eighteen was hell, but she’s seen nothing yet in Karen Amanda Hooper’s Dangerous Depths.

This novel is told through three points of view: Yara (mermaid/selkie/siren/gorgon/human), Rownan (selkie/human), and Nixie (siren). Yara struggles with her new powers while exploring her love for Treygan and her new home of Rathe. In Tangled Tides, I didn’t care much for Rownan, but his motivations become so clear and his love for Vienna is so pure and powerful. He would literally go through hell for her. The character who grew the most for me was Nixie. I loved her chapters and seeing her moments with the sprites.

Hooper’s world building is amazing. I loved seeing the beauty of Rathe, cringed at the horrors of Harte, and enjoyed the additions to her sea monsters’ worlds. The fast-paced plot increased the tension, which was punctuated by moments of humor and love. The end made me cry with its heart-breaking beauty.

Dangerous Depths by Karen Amanda Hooper makes me wish I could live in Rathe too or at least have the ability to draw the exquisite world. I highly recommend this novel and the Sea Monster Memoirs series.

Five Bookworms = I loved it!

The Other Book in this Series:

Click here to read my review.
Posted by Cherie Reich at 7:30 AM