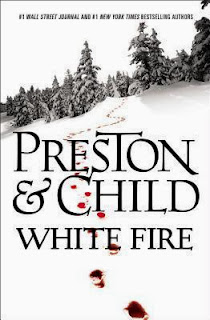 Past and present collide in Preston and Child's most thrilling novel ever . . .

Special Agent Pendergast arrives at an exclusive Colorado ski resort to rescue his protégée, Corrie Swanson, from serious trouble with the law. His sudden appearance coincides with the first attack of a murderous arsonist who—with brutal precision--begins burning down multimillion-dollar mansions with the families locked inside. After springing Corrie from jail, Pendergast learns she made a discovery while examining the bones of several miners who were killed 150 years earlier by a rogue grizzly bear. Her finding is so astonishing that it, even more than the arsonist, threatens the resort's very existence.

Drawn deeper into the investigation, Pendergast uncovers a mysterious connection between the dead miners and a fabled, long-lost Sherlock Holmes story—one that might just offer the key to the modern day killings as well.

Now, with the ski resort snowed in and under savage attack—and Corrie's life suddenly in grave danger—Pendergast must solve the enigma of the past before the town of the present goes up in flames.

Teaser: “That’s a really good question. But it’s one o’clock, and I don’t know about you, but I’m so hungry I could eat a couple of miners myself.” [43% Ebook ARC. Although it’s terrible, I had to laugh.]

Review: Bones hold the answers to 150-year old murders of miners and the arsonist currently razing the homes in a Colorado ski resort town in Douglas Preston and Lincoln Child’s White Fire.

Although I own several Pendergast novels, this one is the first I’ve had the chance to read and works well as a standalone novel. I love Corrie Swanson’s spunkiness and her stubbornness which has a tendency to get her into a lot of trouble. Pendergast comes across as a modern-day Sherlock Holmes with his cold and calculating detective skills with a tiny dash of The Mentalist’s Patrick Jane’s flare. I enjoyed seeing Pendergast’s softer side come out.

As a Sherlock Holmes’ fan, I adored the connection to the case with Oscar Wilde’s retelling the miner’s story to Conan Dolye, who used the premise within his own work. The plot glides easily through the past and present, and I loved the addition of a Sherlock Holmes’ tale within the novel. Although I found who the arsonist was predictable, I did enjoy reading the story to see how everything would play out. The dense writing sometimes slowed the pace down, but I didn’t lose interest in the story or characters.

I would recommend Preston and Child’s White Fire and look forward to reading previous and future Pendergast novels.

Four Bookworms = I really liked it!
Posted by Cherie Reich at 7:00 AM