Hook Me: Witch Way to Turn by Karen Y. Bynum 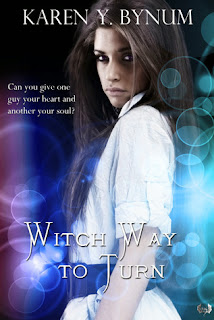 Book Description: Can you give one guy your heart and another your soul?

The last thing eighteen-year-old Breena Cross needs in her life is more complications. It’s all she can do to balance studying, working, trying to keep her foster-sister safe and drooling over the new guy at work. But things go from complicated to crazy when a fit of rage ignites the dark magic inside her and she finds herself fending off the supernatural underworld.

Myles, Breena’s drool-worthy coworker and vampire convict, is carrying a load of secrets--one of which is that he’s fang-over-lip in love with Breena and in danger of violating the terms of his sentence.

Orin is a soul-hungry assassin sent to kill Breena. However, he takes one look into her eyes and sees his own lost humanity. For once thinking of someone other than himself, he chooses not to end her life, even though it means risking his own.

Despite a convict and an assassin fighting over her, all Breena wants is custody of her sister. But to do this, she will need help from both Myles and Orin. And if Breena doesn’t learn to control the darkness within, she could lose her sister…forever.

First line: Breena Cross glanced at her watch.
Last line read: She'd taken to Myles fast, following him around like a little lost pup, hanging on his every word.

Overall Impressions: Wow! Breena and Jenny's lives are hard to read about. The girls are foster sisters, and my heart ached for them. Breena does everything she can to keep Jenny safe and hopes one day to get her out of the horrible foster home she lives in. The dash of paranormal and fantasy from vampires to witches adds to this very realistic and gritty sample.

Would I keep reading?: Yes!

***There will be no Hook Me next Wednesday as I have a special announcement for December 18th.***
Posted by Cherie Reich at 7:00 AM